THE FIRST TIME I met Thomas (at San Diego’s Tower Bar), I knew we’d be friends. Here are some highlights I’ve learned about him: He’s been in five bands and played along with nine others as singer, bass guitarist, farfisa organ and theremin player. He taught art at his high school alma mater. He’s been tattooing professionally for the last ten years. He was a contributing artist for MAD magazine. He spent four months scuba diving and working at a sea turtle reserve in Mexico. He’s a partner in Reptilicus Records. He’s had ten graphics with Santa Cruz skateboards—and that’s the short list. I am biased as he’s become a good friend, however, there is no doubt that he will go down as one of the great lowbrow artists and tattooers of all time. —Alyasha Owerka-Moore 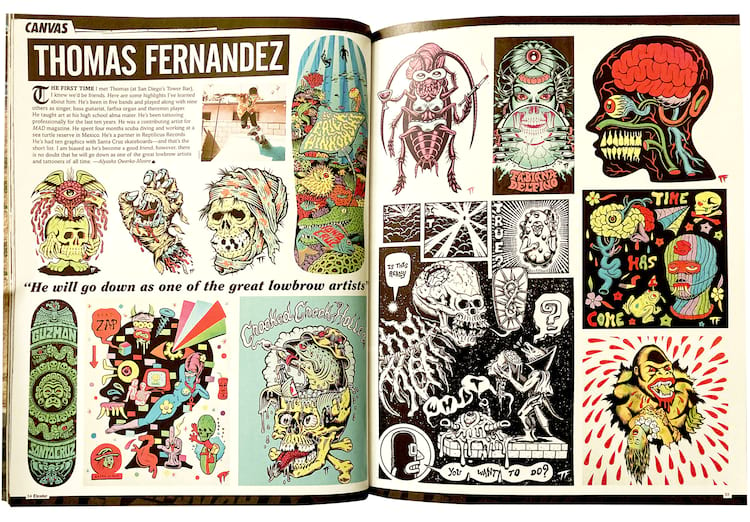 Some of the imagery you seem to gravitate toward involves monsters, comics and other cultural landmarks that existed decades before you were born. Can you describe why they inspire you?
I’ve never liked the idea of being spoon-fed culture. I like the process of digging to find things that resonate with you, rather than settling for what’s trendy. It’s more impressive to me that the artists who made these things—monster art, psychedelic posters, underground comix—existed in a time where their creations were not socially accepted. These individuals weren’t afraid to be subversive with their work and did something different from the artistic norm, not to mention it was all developed at a time before computers existed. I have so much respect for people who ink their work by hand and had to use older print methods. There’s a mystique and a vibe to older things that I dig so much.

It’s clear that you can create with black ink on paper, paint on a canvas and using Illustrator on a computer, not to mention your years of tattoo work. Is it difficult to shift gears between these different mediums, and what do they each mean to you?
It hasn’t been too difficult to play musical chairs with my work. It’s a nice break mentally to switch styles and do something different to avoid burning out on one medium. To me, art styles are kind of like languages, so once I learn to “speak” it I don’t really forget it. It’s like muscle memory. 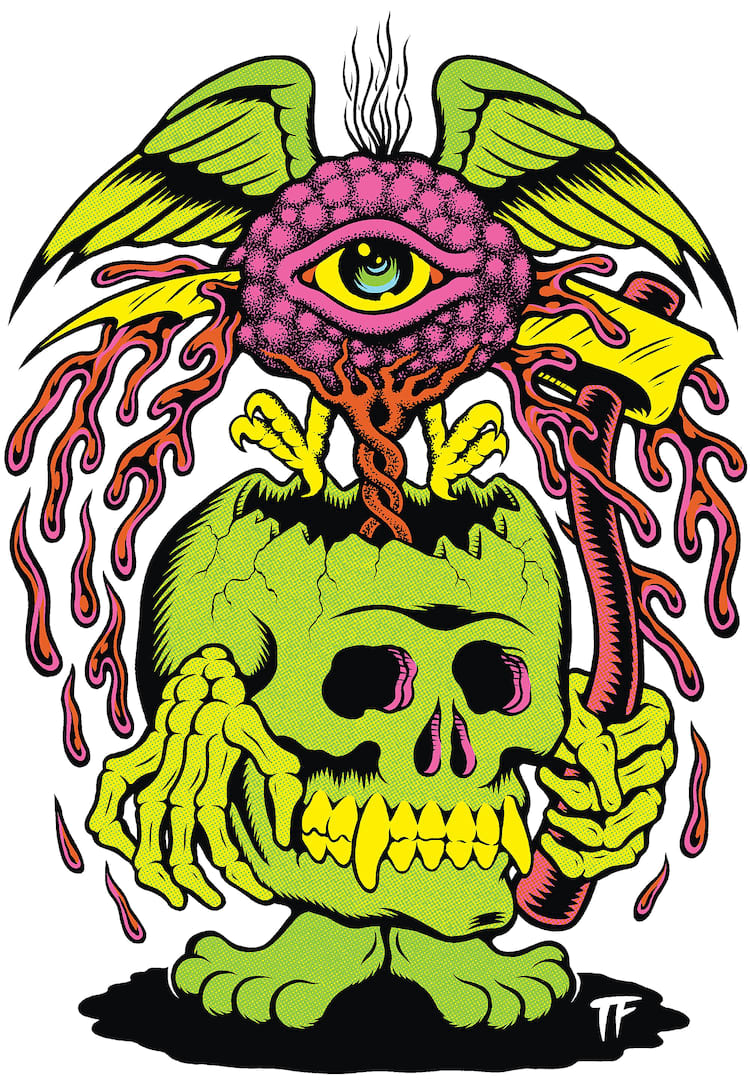 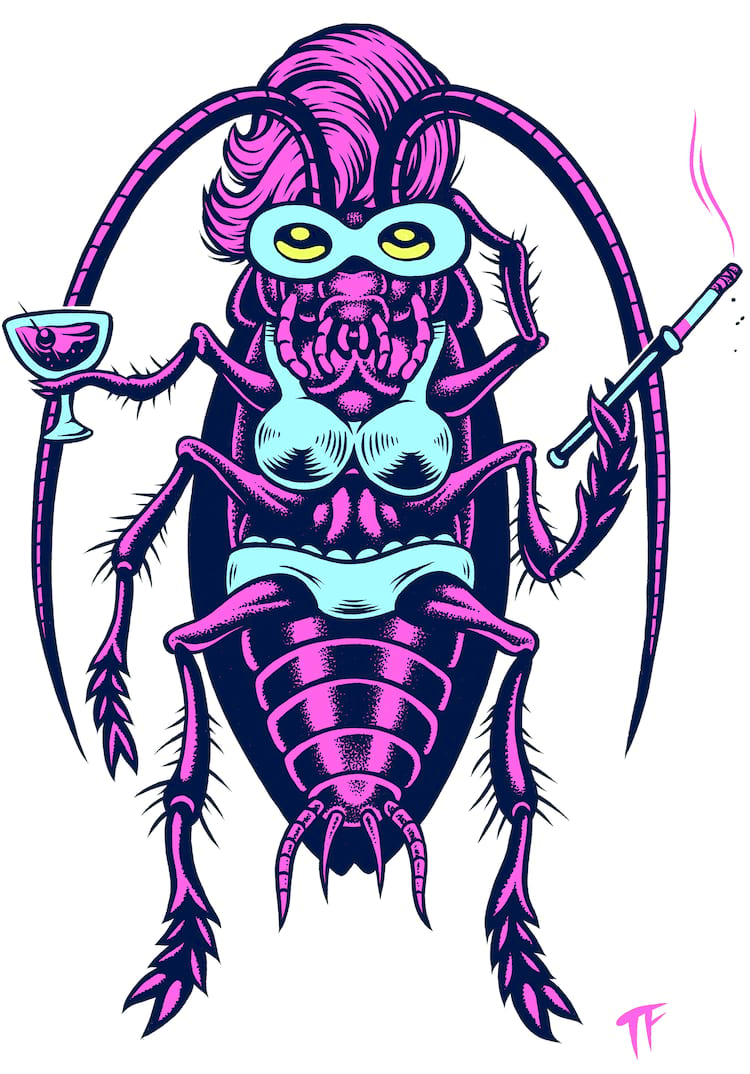 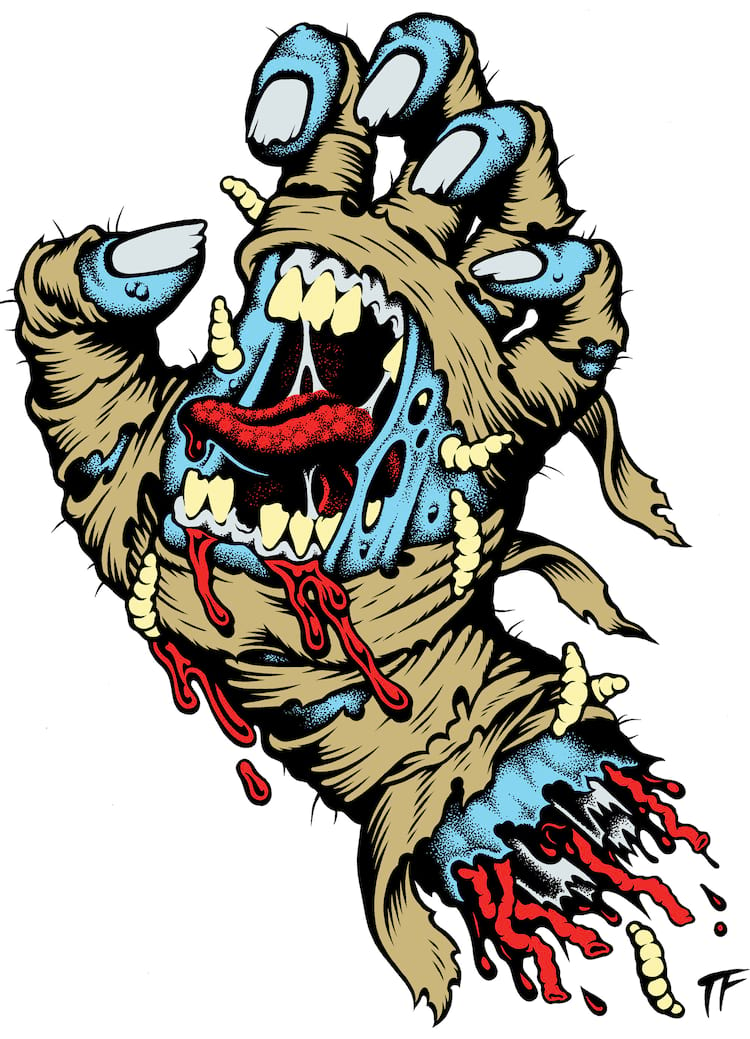 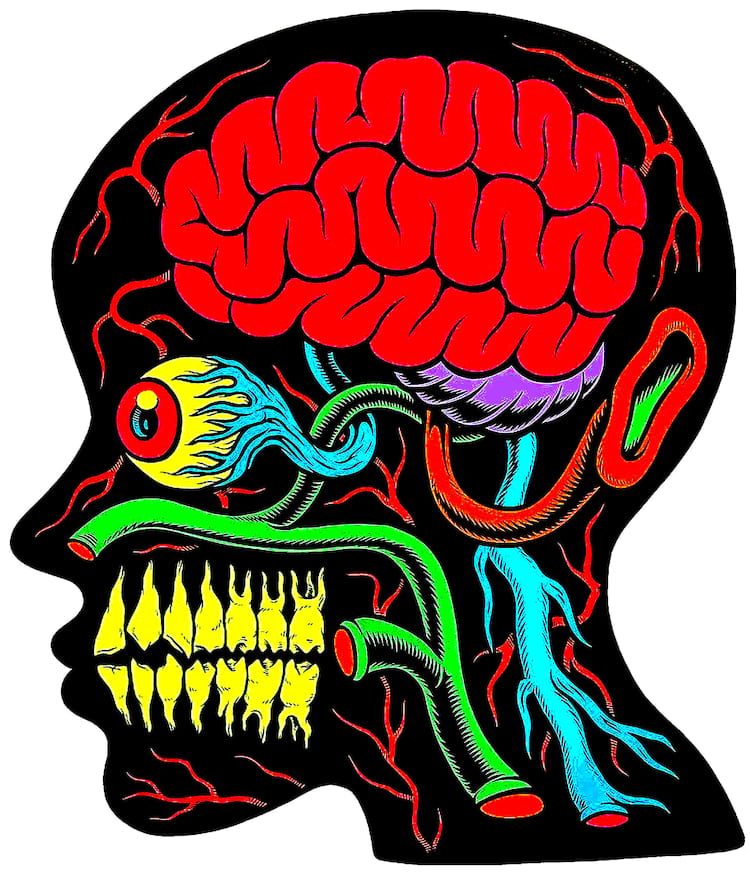 With your decade-plus of tattoo work, how many people do you estimate that you’ve inked?
I started tattooing 12 years ago. If I had to estimate I would say at least 1,000, but maybe somewhere around 1,500? I don’t know. Math was never my thing.

Any funny or interesting stories that happened while buzzing away on someone?
I’ve had some spooky ghost encounters in tattoo shops and on the road. I played in a game of cee-lo at a tattoo convention that had a $13,000 pot. I didn’t win. One shop I worked at went to a pool party at Danny Trejo’s house. He has a tile machete in his pool. I once had a dude nod off mid-tattoo. He woke up disoriented and tried to wrestle my machine out of my hand while I was pulling a line on him.

You’ve played in a lot of bands. Any current acts you’re working with?
I sing and play bass in a band called The Joe Blows. We have some songs on streaming platforms and we put out a 7’’ with Sweatband Records. Some of our music was used in a video that had Hosoi skating in it. We took a break because of the pandemic but we’re going to start playing again. I’ve been DJing more since we haven’t been as active with the band—mostly ‘70s-’80s punk records. 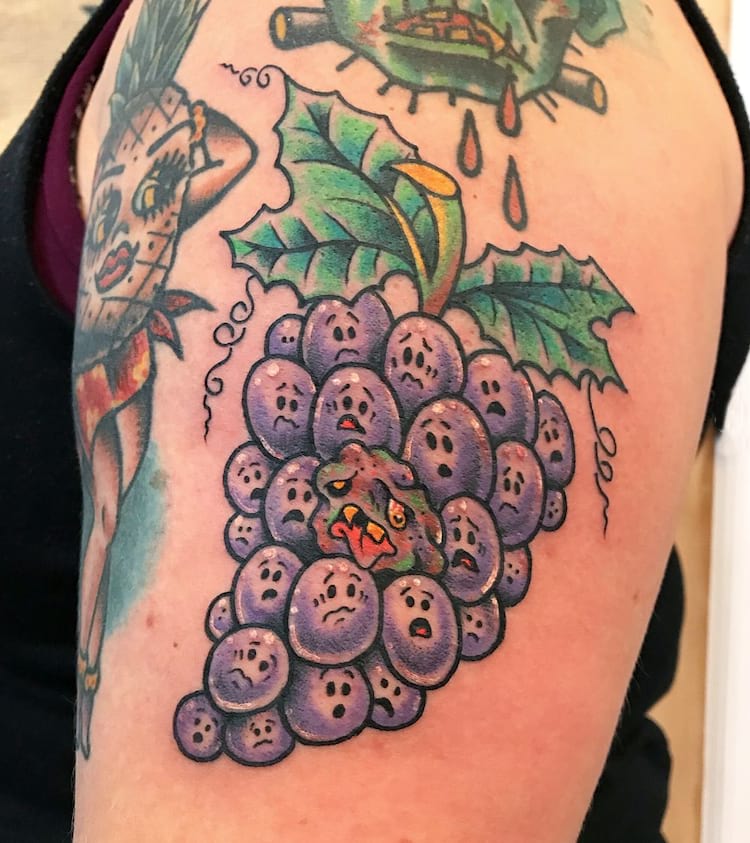 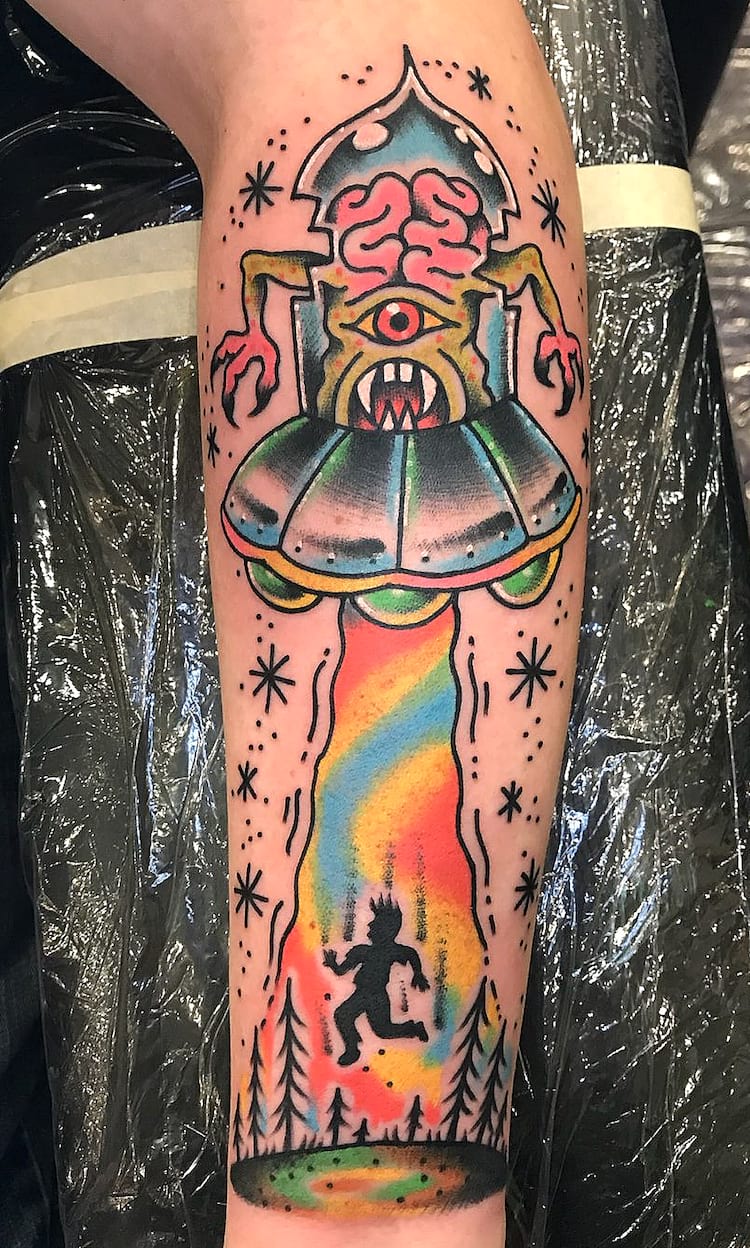 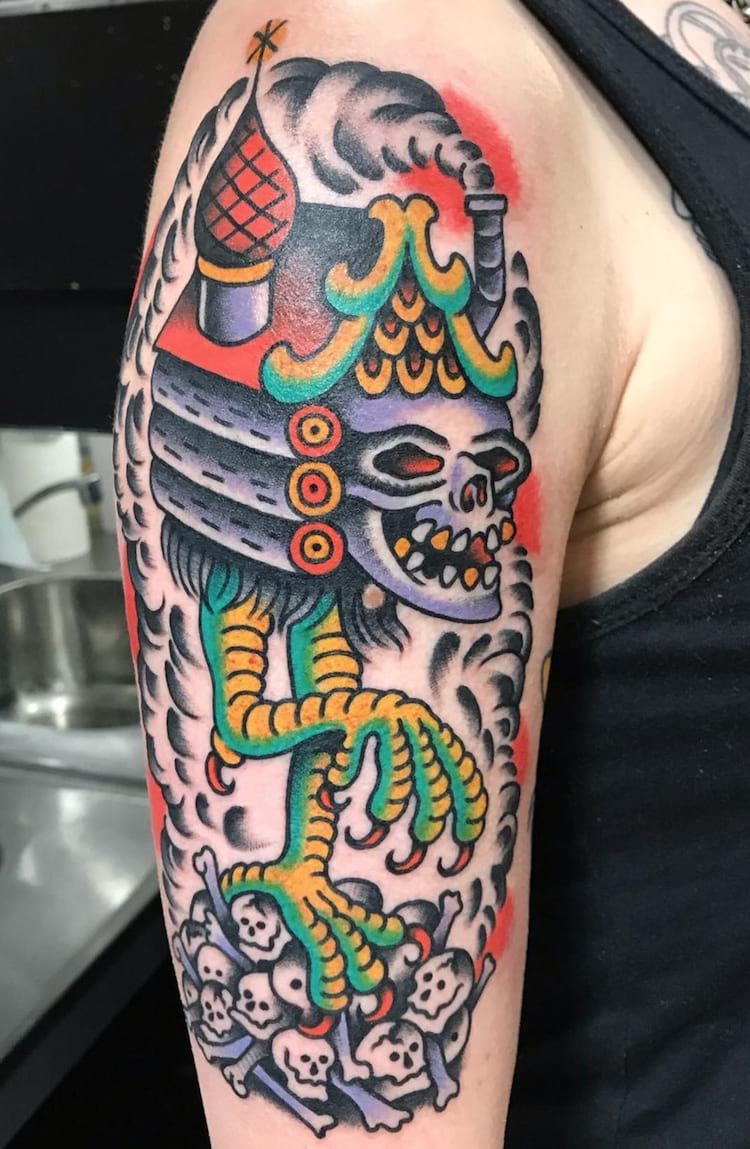 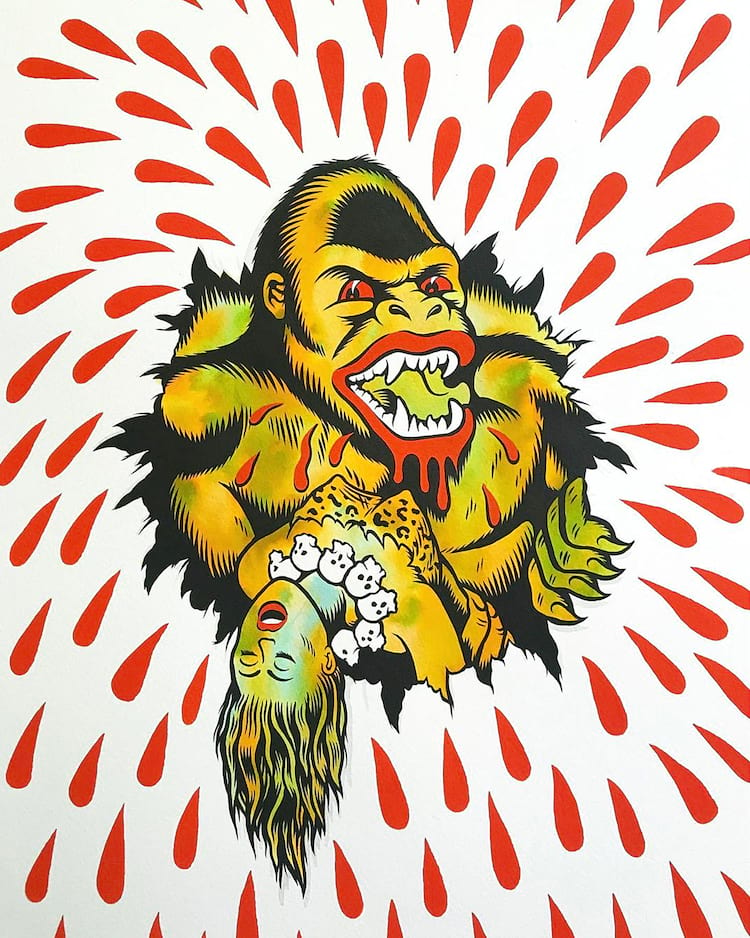 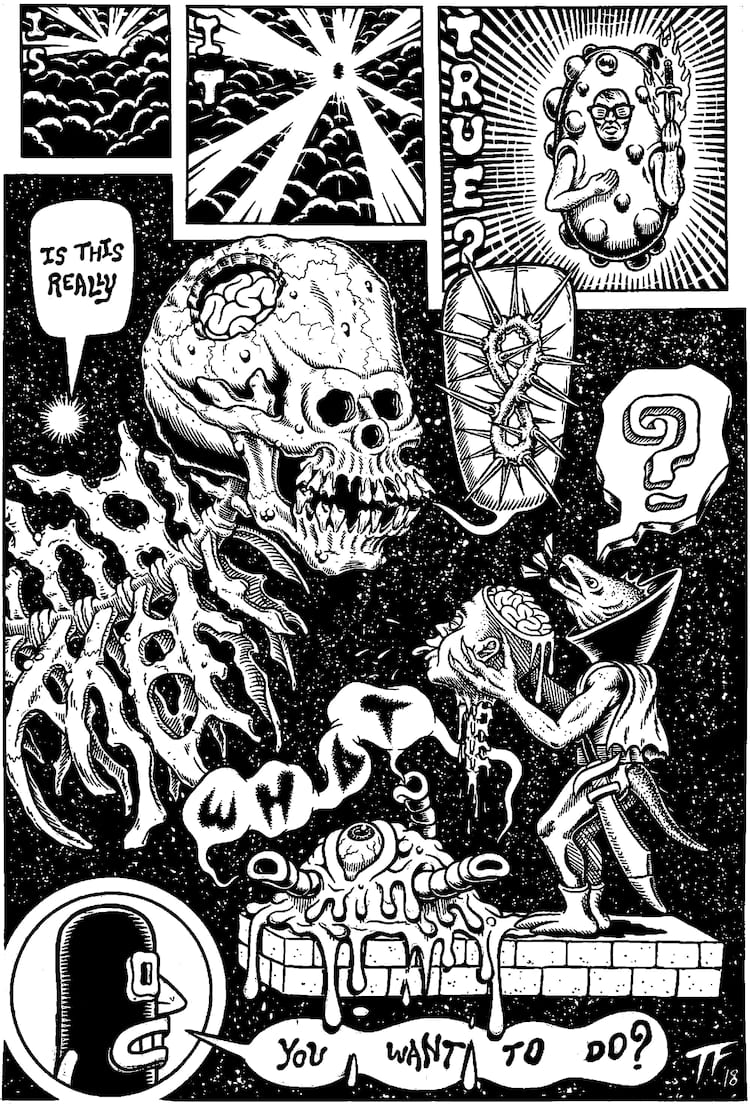 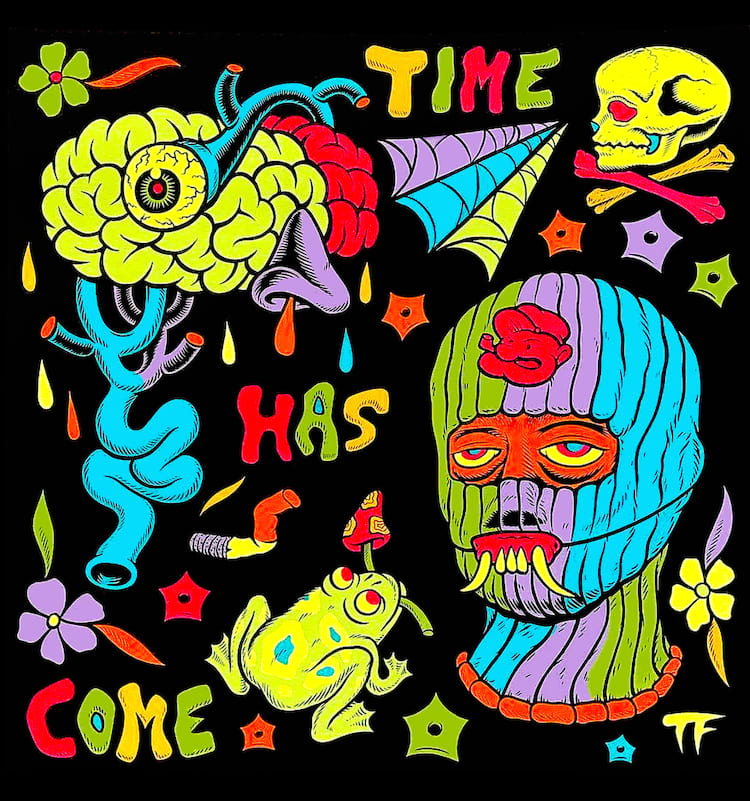 Santa Cruz skateboards has an epic history with board graphics. How did it feel to join their legacy of artists?
It’s insane. I would call it a bucket-list goal but growing up I didn’t think that would even be attainable. I’ve never worked harder than I have on my graphics for SC. I strive to improve with each one. I just hope I’m doing this lineage of artists justice. A huge thank you to Tyler, Andrew and the folks at Santa Cruz that keep me drawing.

Can you describe what the art of Jim and Jimbo Phillips has meant to you?
When I was in 3rd grade my teacher gave me—or I stole it, I can’t remember—a skateboard keychain that had the Keith Meek Slasher on it. That graphic blew my mind and sent me down the rabbit hole. Since then I’ve grown to appreciate a ton of artists’ work, but I keep going back to that golden era of Phillips Studio’s work. I get stoked from looking at those illustrations. It really gets you hyped to go skate. Getting to tour the NHS offices, museum and archive was killer. Staring at Jim’s original inkings up close was something I’ll never forget. The erased pencil marks, brush strokes, white ink corrections and overlays are all things that give you a better sense of the artist’s process. By the time the graphic is printed all of those things can no longer be seen, so to nerd out and fog up the glass on those illustrations was awesome. 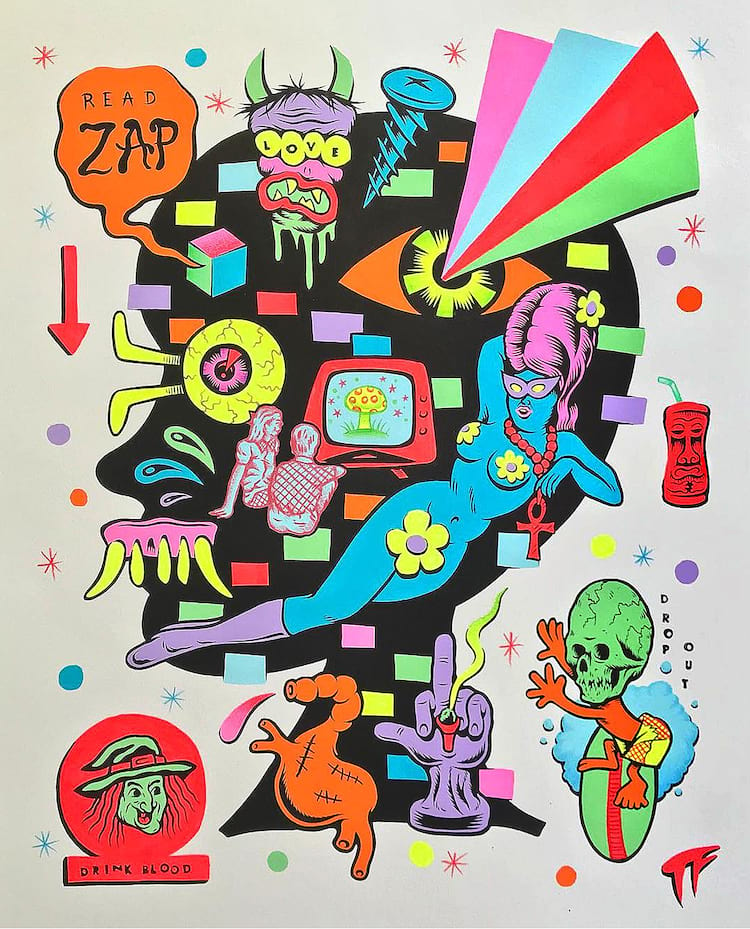 Who are some of your favorite skaters?
I’m a big ‘70s-’80s skateboarding nerd. Olson, Salba, Phillips, Gibson, Blender, Danforth, Barbee, Dressen, Lucero, Grosso, Losi, Mountain, Knox, Gonz. As far as contemporary riders go, I’d say Erick Winkwoski, Jake Wooten, Fabiana Delfino—really the whole SC team right now rules. The Creature crew rips. Dead Dave and Craig Questions are two of my favorites. I’ve made many friends sit down and watch DD’s Earth Goblin part. It would rule to be able to design a deck for Dave one day. His mutant shape is also one of my favorite shapes to ride. There are also so many rad teams and crews out there, Osaka Daggers, Barrier Kult, Worble, Unity, Fancy Lad.

What is going on with your brand Live Rad skateboards?
I teamed up with my friend Zack to start this brand and we’re finally able to get things moving. We have two shaped boards out now in two different colorways and I have another two boards coming soon. We have Damon of Patines Americanos printing our boards right now, and Jesse from the Cat Palace helped us get our start. We’re booking skate events to vend at this year and lining up some collaborations, one of which will be boards for San Diego’s Tower Bar. I hope to keep growing this company so we can keep making boards, start flowing some riders, make some videos and just have fun with it. Have a good time while there’s still time, right?

Right on, Thomas. Thanks for contributing to the mag! 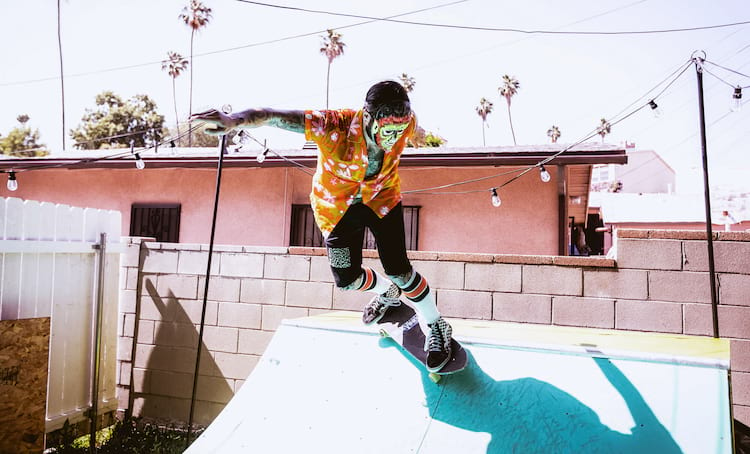 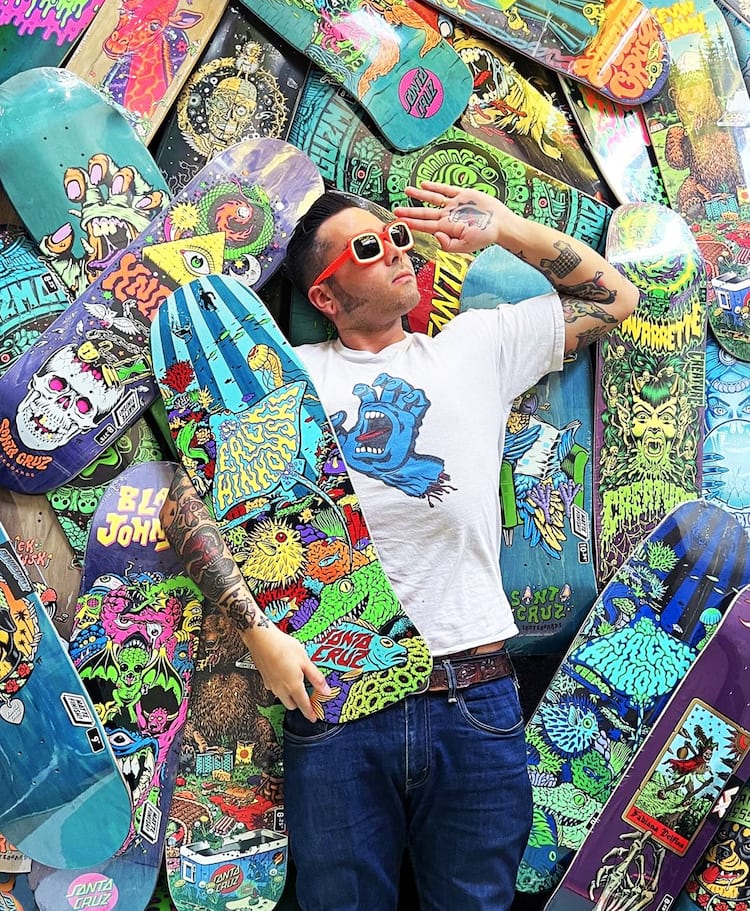 For more art and info on Thomas, visit his Instagram: @liveradstudios