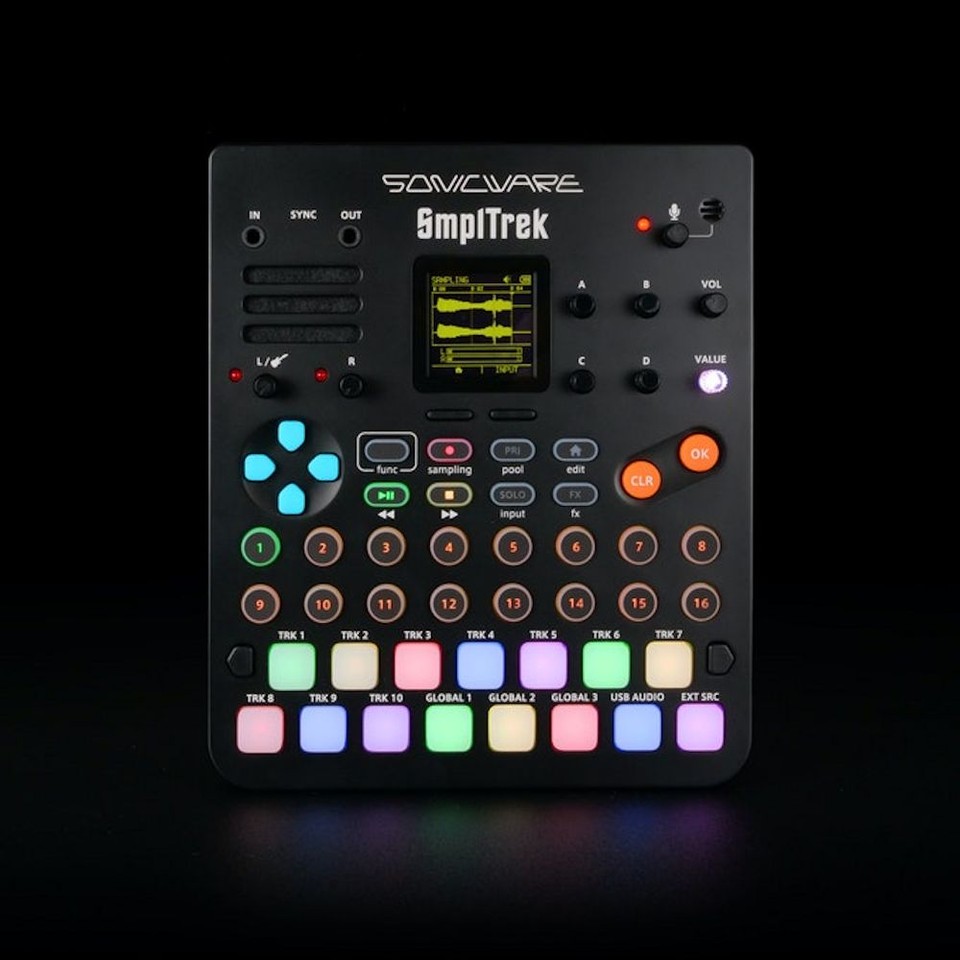 Japan’s Sonicware has developed a hand-held groove machine for folks who create music using sounds from the world around them. The SmplTrek is a battery-powered sonic sampler with a built-in sequencer that can also serve as an audio interface for live streaming.

For music makers and DJs who want to get grooving straight out of the box, the SmplTrek comes loaded with more than 500 sampled sounds, over 100 drum kits and 30 digital effects, with the option to import more via SD card.

But the device also has a built-in omnidirectional microphone for one-touch audio sampling at 16-bit/48-kHz resolution while out and about, though users can also plug a dynamic microphone or instrument into the ports around back or connect to MIDI hardware.

The captured samples can then be automatically divided between the banks of velocity-sensing LED pads or edited manually, and time stretched or pitch adjusted to match the tempo and key of a song creation in progress.

If you stumble across a killer sound that would be perfect for your next creation but forgot to pack your SmplTrek, you can use your smartphone to record the audio and then load it into the sampler later over USB.

Creative projects can have up to 16 sections or “scenes” that are navigated via backlit buttons within easy thumb reach. Each scene comprises 10 sequencer tracks for loops, single-shots, drums, instruments and external MIDI, along with three audio tracks per scene for things like vocals or guitar.

Tunesmiths can monitor project development via the 1.5-inch OLED display up top, and plug in headphones for quiet listening or opt to share publicly via the included speaker. The various project components can be mixed down ahead of export to single audio file for storage on a SD card or sent over USB to a computer running music production software.

Two analog outputs cater for connection to external amplification or a PA system, or users can cable the SmplTrek to a smartphone or computer for the potential to livestream over social media, while also adding live vocals if desired. The SmplTrek can be powered by AA-size batteries for portable ease, or by an AC adapter.

Designer Yu Endo is currently raising production funds on Kickstarter, where early pledges start at ¥35,500 (about US$290) for a very limited time before rising to ¥47,500 ($386). If all goes to plan, deliveries are estimated to start in September. The video below has more.