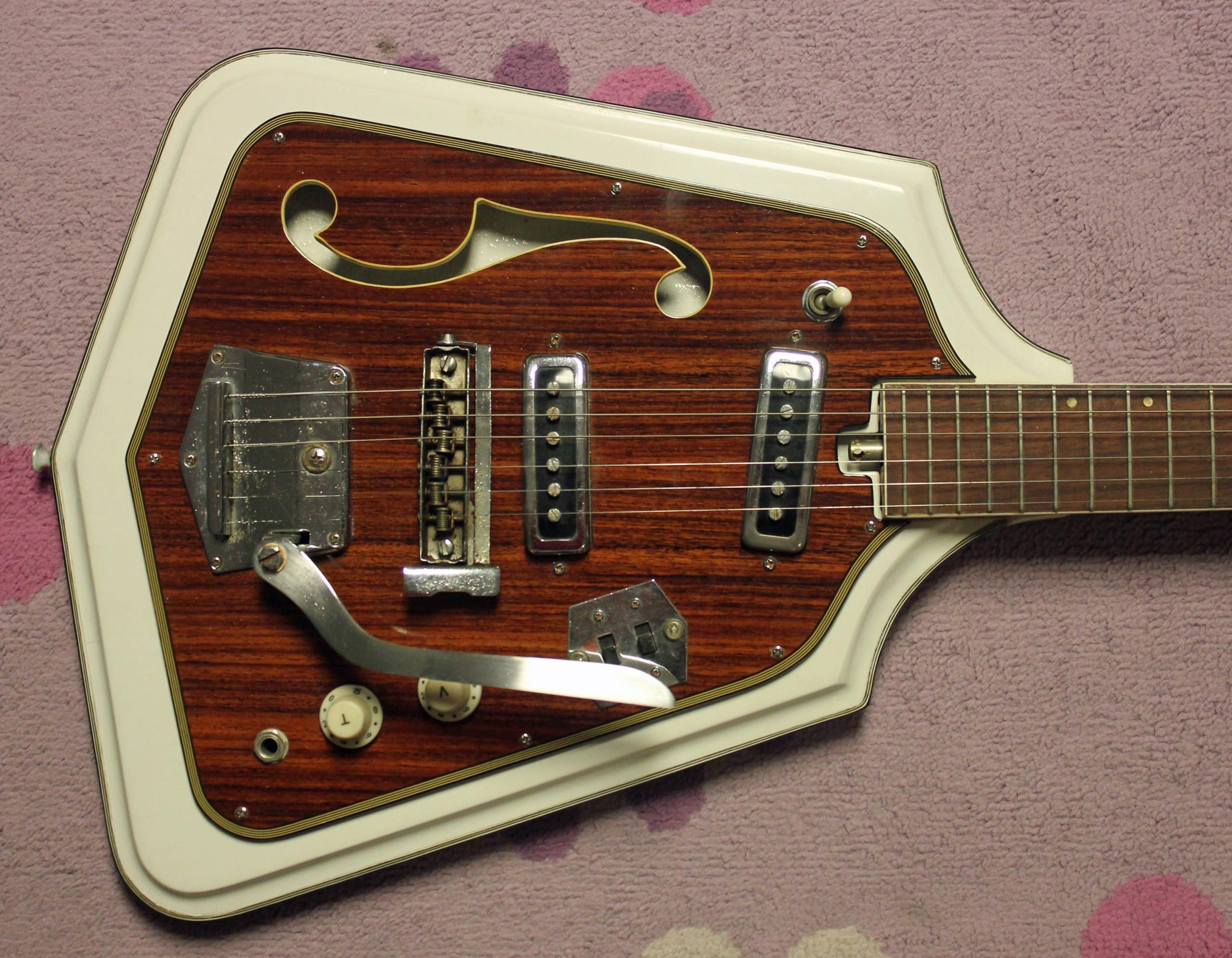 Is That a Canoe Paddle? A Surfboard? No, It’s the Domino Californian Rebel

Recently, I’ve been thinking about the Ventures, their amazing music, and the impact they made. In case you missed it, one of the band’s founding members, Don Wilson, passed away in January. I was reminded of my interviews with Don and his take on the band’s history and influence. For the uninitiated: The Ventures sound came to embody surf rock and instrumental prowess, featuring driving rhythms and catchy riffs that put the electric guitar out in front. Don and the boys performed their hit song “Walk, Don’t Run” on Dick Clark’s Saturday Night Beechnut Show in 1960 and lit the kindling for the first electric guitar craze—with the Beatles creating the inferno a few years later.

During the ’60s, the Ventures were insanely popular in Japan, where their recordings became the sound of American popular music and culture. Since the Ventures were an instrumental band, the music was more accessible to Japanese fans. Mosrite’s Ventures models were all the rage and just about every guitar manufacturer in the Land of the Rising Sun was trying to get 6-strings into the hands of Don and his bandmates. (I’ve written before about how Mosrites were dissected and studied, which led to all sorts of guitar designs and build ideas throughout Japan.)


The electronics include a simple volume and tone knob, a pickup selector, and two mini switches for a “lead” or “rhythm” tone.

Here in the U.S., the Ventures—who were formed in Washington—were musical representatives of the Southern California lifestyle, along with Dick Dale, the Beach Boys, and Jan and Dean. As I was thinking about Don and the Ventures, I remembered a very rare guitar from the ’60s that seemed to capitalize on the California surf aesthetic and instrumental surf rock: the Domino Californian Rebel. The marketing copy for this wacky guitar was straight out of 1967 and included all the buzzwords and catchphrases to lure budding instrumentalists:

“Cause today’s ‘top rockers’ know … Now DOMINO’S World Leading, Pace Setting SOUND-POWERED design … have taken on the appearance of the ‘CALIFORNIAN REBEL’ acoustic electric guitar. Coming from a family of the highest fashion in stylish contemporary looks, and high powered, turned-on Sound Action, the-all new ‘CALIFORNIAN REBEL’ is more than ready to begin its record breaking flight to the top of today’s music scene! DON’T BE LEFT OUT of tomorrow’s Shout-Shaking excitement … Grab Hold and Tear Loose with DOMINO’S latest gift of imagination.”

I mean, that would be enough to get even Gidget—you gotta search this one!—to pick up an electric guitar. The angular body sports an f-hole, a German carve, and has plastic wood accents—a nod to the famous Pontiac Woody station wagon, which my grandfather owned back in the day. The guitar was made at the Kawai factory in Japan (and I really think I need to write a longer story about that company in 1967, because there were so many crazy guitars coming out of there that year). My two-pickup model cost $90 in ’67. Apparently there were other pickup options, but I haven’t seen them.

These have a Gibson-scale length and a lightweight feel. The stock electronics include a simple volume and tone knob paired with a pickup selector and two mini switches for a “lead” or “rhythm” tone. The sound is very similar to the Kawai-built Kingston electrics favored by bluesman Hound Dog Taylor. The Kawai tone was always a bit aggressive since they used a lot of series wiring. Other little details include beautiful binding, a slotted headstock, and a cute, little bridge mute which was fashionable at the time and great for surf pickin’.

This guitar was an exclusive of the New York-based Maurice Lipsky Music Co., which used the Domino name on imported guitars. Alas, the Californian Rebel was a shooting star that remains rather elusive today. It never had quite the impact of Don Wilson and the Ventures, but this quirky instrument is a nice little time capsule of their era.

Guitarist Mike Dugan shows us that the Californian Rebel is a guitar fit for sun, fun, and fuzz. And it’s a perfect sub for a Vox Phantom in your period-correct Brian Jones-era Stones cover band.