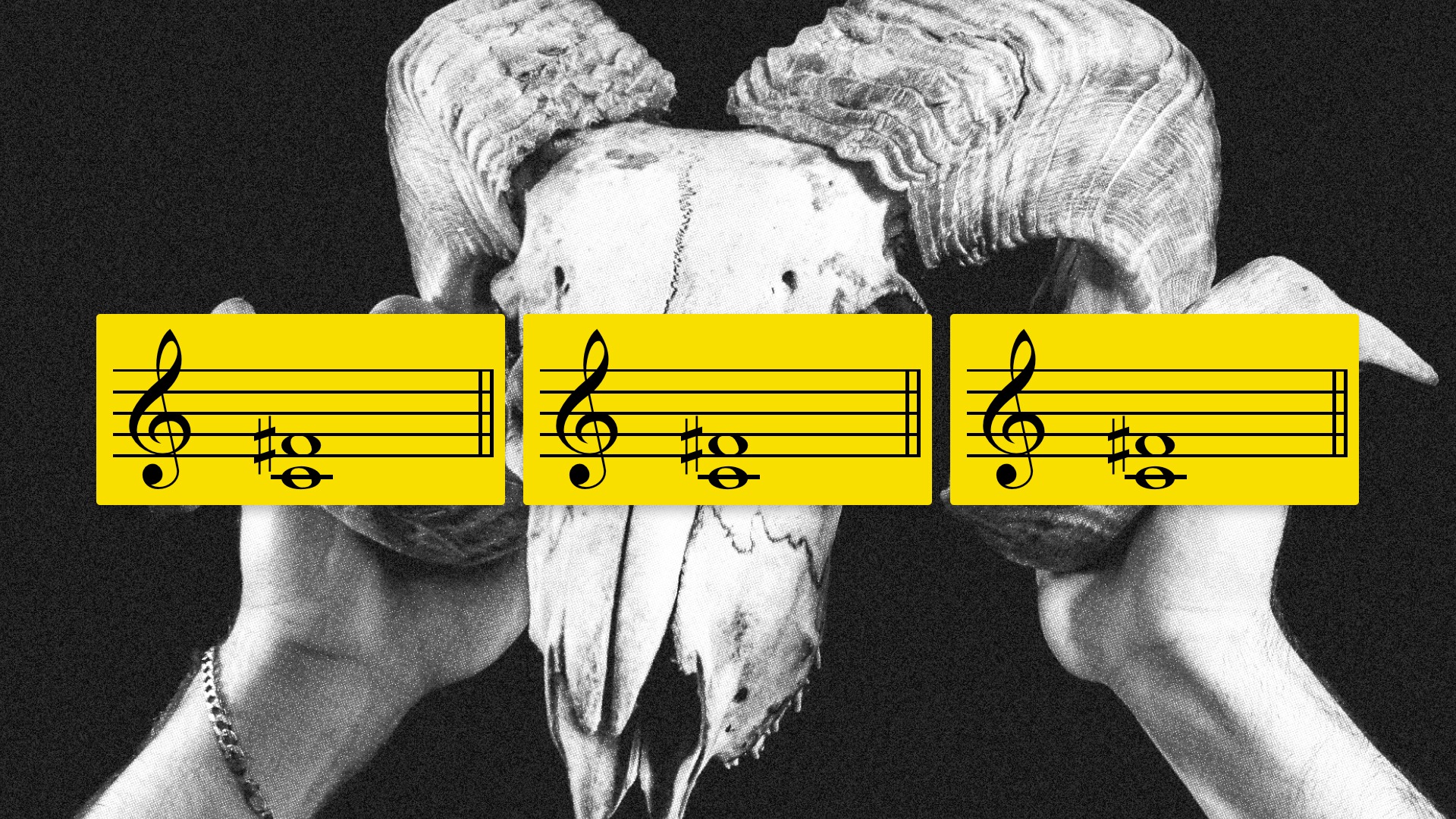 What is a Tritone? How to Use Music’s Tensest Interval

The tritone is an important musical interval to know in music theory.

It shows up in some of the most fundamental chords and scales, but some musicians try to avoid using its tense, grating sound.

But what is a tritone anyway? What does it sound like and where is most often used?

In this article I’ll break down the basics of tritone intervals, explain why its controversial.

What is a tritone?

A tritone is a musical interval of 3 whole steps or 6 semitones between two notes.

Sometimes called an augmented fourth or diminished fifth, tritones have a distinctive dissonant sound that acts as a source of tension in many common musical scenarios.

They also have the unique property of dividing the octave equally in half.

Due to their intense dissonant sound, tritones are rarely used by themselves. However, they can add richness in context with other notes in a chord or melody.

Tritones appear in many fundamental musical structures such as the major and minor scales and dominant 7th chord.

The devil in music?

A tritone is a musical interval of 3 whole steps or 6 semitones between two notes.

At some point the tritone developed a reputation as an evil, discordant sound.

You’ll often hear it repeated that the Catholic church deemed the tritone so malicious that it was banned in musical compositions. The latin term ‘Diabolus in musica’ that was sometimes used to describe the tritone seems to lend credibility to the idea.

It’s a fun story, and you can see how it became such a common trope in music theory circles.

But despite its unsettling sound, the reality is that the claims of an officially banned interval are a bit exaggerated.

Rules of counterpoint do have certain conventions around tritones that are meant to preserve smooth motion and consonant sound, but tritones are all over music from many periods.

The tritone interval occurs naturally in the most fundamental musical scales in western music—major and minor.

The tritone interval occurs naturally in the most fundamental musical scales in western music—major and minor.

Hot tip: You won’t hear a melodic tritone interval in the melodic minor scale due to the raised sixth scale degree, however it does appear in the natural minor scale as well as the harmonic minor scale.

You’ll see this note come up often in jazz chords like the min7b5 that occurs in any minor ii-V-i progression. It’s also used as a chord extension to add even more tension to dominant 7th chords.

Finally, since the tritone is found in the major scale, it also appears in each of the modes of the major scale. Sometimes called the church modes, they’re the most common scales you’ll find in modern music outside the basic major and minor.

Speaking of which, another common place you’ll find the tritone is within any dominant seventh chord.

Think of the V7 in the key of C major—G7. Spelling the chord out from its root gives you G-B-D-F.

If you evaluate the relationship between each chord tone, you’ll find that the B and F are separated by a tritone.

This grinding interval is what gives the dominant seventh such a strong sense of tension. In C major, you’ll hear these notes naturally want to resolve to the chord tones of the tonic—that’s the magic of functional harmony!

But if the tritone is where the chord’s sense of tension comes from, it creates a sonic relationship with other chords that contain the same notes.

For example, try spelling out a Db7 chord—Db-F-Ab-Cb. Cb is enharmonically equivalent to B, so you’ll find the same tritone hidden inside the Db7!

It’s enough information to give Db7 a similar sense of tension and release to G7 in the context of a harmonic progression. If that weren’t enough, the root of the tritone substitution is exactly a tritone away from the root of the dominant 7th!

Using the Db7 in place of the G7 is called a tritone substitution. It’s a funky non-diatonic chord that can give you another option to try when you need a dominant sound.

This symmetry around the tritone is one of the many reasons it’s considered so powerful.

The symmetry around the tritone is one of the many reasons it’s considered so powerful.

Scales with a characteristic tritone

While the tritone can sound jarring in isolation, it works great in context in both melodies in harmony.

One place you’ll find tritones make an interesting contribution is non-standard scales. While even the major scale contains a tritone interval between some notes, those scales that include a tone interval away from the root are distinctive.

The lydian mode is very similar to the major scale with one important difference—the fourth degree of the mode makes a tritone interval with the root.

Stacking up thirds on the root note of the Lydian mode gives you a Maj7#11 chord. The #11 note on top is just a tritone interval an octave up!

The result is a pleasing and sophisticated chord that can add extra color to your basic major chords.

It’s also a memorable characteristic note to use in a melody. For example, the Simpson’s opening credits music features a melodic tritone in its opening figure.

The sound of musical intervals

Each musical interval has an important role to play in different situations.

While tritones might sound a bit grating when exposed, their strong tension is what powers important musical relationships in melody and harmony.

If you’ve made it through this article you’ll have a great start for using tritones in your music.