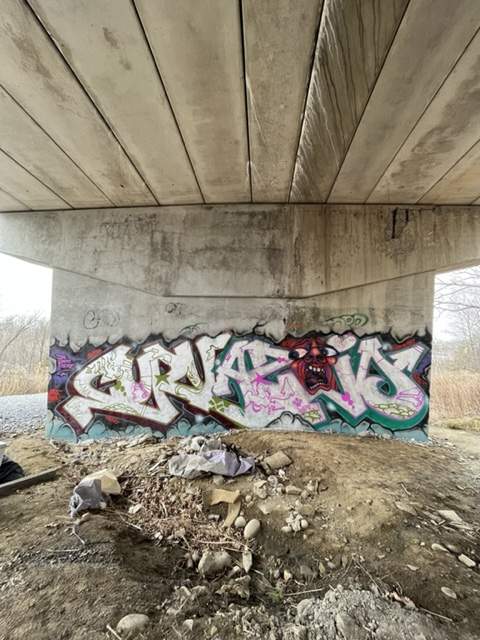 Alright so thanks for taking the time out to do this interview, can you give us a brief introduction to who you are, what your history is in the graffiti game and what crew do you rep?

Curve from the TGE Crew. I started painting in 1995 in my hometown of New Haven Connecticut. In 1997 my mom and I moved to Philadelphia. Later I lived in NYC where I encountered more writers and was put down with several crews.

From just glancing at your instagram I can see you’ve done a ton of work over the years! After all this time do you still do this purely for the joy of it, what has kept you going all this time?

I do this for the joy. Even when it’s not enjoyable, I still feel the need to do it. It truly helps me navigate my daily life.

You’ve got a lot of friends in the game after being involved for so long, do you still do collaborations with other artists or do you do mostly solo work these days? Got any cool jam or collaboration stories where you guys almost got busted?

I still do lots of collaborations, but it’s usually with artists involved in other disciplines; like video editing, music, or fashion. Because scheduling and coordination with friends is harder these days, we paint together less. When we are all able to, I really cherish the opportunity. When I have any window of time to paint, I want to just get out there and rock with no setbacks.My favorite get away story is one of my best memories. It was actually the first time I painted with other writers. To my surprise I got a late night call from an older writer who I’d been hanging out with. He told me to head down the nearby train tracks, under a specific bridge. Before this, I had been painting solo and unknowingly gaining some recognition around the scene. I had no idea what I was in for, but when I arrived I saw about 7 guys lined up doing pieces. It was all my favorite local legends, almost like an all-star league in action. I was greeted and told there was a spot for me at the end of the wall. I really couldn’t believe this was happening and as I started to crack my outline, two figures with a flashlight hopped down onto the tracks. We all ran and I actually remember a few of the writers hooting and hollering like it was a fun time. I hid in some bushes for a while, and then climbed up to the street from the tracks. As I crisscrossed through small back streets towards home, I decided to pass by the apartment building of the guy who invited me out. Low and behold everyone was there in the doorway of the building, out of breath and relieved to see me. The camaraderie and laughter was thick and it was one of the first experiences that really hooked me to graffiti.

There’s so many, but the first that comes to mind is Style Writing from the Underground. In some ways its complex and doesn’t merely scratch the surface of graffiti. In other ways its a perfect compact learning tool. It showcases nearly every important style and I feel that it conveys the energy of graffiti and the mentality of most writers.

You’re a huge fan of movies from what I can tell, what movie do you think captures the NYC spirit the most and why?

Yes I’m a big fan of movies; both bad ones and good ones, classics and obscure. It’s mostly about the shared nostalgia and what a movie can show us about history, society, and people. I like to explore the multiple meanings when isolating or painting particular movie scenes, especially when there is graffiti in the background. There’s an interesting blurred line between movie sets and actors with real lives in the the real world. This really became apparent to me when I worked for a few years as a scenic painter for tv and movies.  Although I did not grow up in NYC, I spent a large portion of my childhood there. I remember often riding the bus with my Grandparents through Times Square in the late 80s and early 90s. Being glued to the window was like watching a movie itself. There are too many great old movies that capture an NYC Spirit or an NYC Mood. If I had to choose one, I’d say Taxi Driver, or The Professional.

One of the most interesting posts you made on instagram was the montage you made of subway photos from 77-79 from the NYPL archive, I can see you have a real nostalgia for this time. What was NYC like then? It sounds like it was exceptionally dangerous, but I imagine that brings its own amount of fun as well!

I’m not the right person for this question. I only post that content to celebrate the origins of the style of writing which we practice today. I can’t speak for the 70s, but I think in the 90s all cities went through a dangerous time. Naturally, every era will be looked back upon with a certain amount of romanticization. Chaos, violence, and danger definitely allows for fun and a release from the stress and anxiety. I see many young people are experiencing that right now.

Speaking of early NYC days, Who do you think is an underrated graff artists in graffiti’s history that you think changed it for everyone that people just forgot?

I think a lot of writer’s in this category prefer to stay underrated and go to great lengths to keep that status. I don’t think people necessarily forgot about this writer, but one who comes to mind is Hence, an NYC writer who has been well rounded and very active for a long time.

I went to public schools growing up where Art was a skill that was held in high regard. I trained myself to draw, but I had lots of support and encouragement from my family, many of whom were artists/art lovers themselves. I took some classes outside of school for things like comic book creation, pottery etc. I always knew that art was my thing, more than anything else, so I pushed myself in that vein. What helped me was painting large scale pieces on walls. That gave me the confidence to tackle any project. In high school I had a painting teacher, who hated graffiti, but taught me about color theory and the importance of honing your own personal style.

That it all takes work, trial and error, and risks. Definitely put value in the relationships with people you meet along the way.

As far as travel goes where all have you been? Any crazy travel stories you can share?

I’ve been to various cities across the US, Canada, Europe, and Central and South America. In Rio De Janeiro I was set up with a local writer named SWK. He took me through his favela and brought me to paint a wall at the very top of a mountain, close to that Christ The Redeemer statue. The ingenuity of the built homes along extremely steep hills was something I’d never seen before. After breaking down the history and the politics of the area, he left me alone to run an errand. Of course, a group of guys approached me and weren’t too happy about me being there. I immediately told them I was with SWK. They looked surprised and their whole demeanor changed. I could tell he had a massive amount of respect in that favela because these guys were very apologetic to me. I was relieved and pretty glad, to say the least. When SWK returned I told him what happened. He just laughed and said Yeah they know about me around here.

Shoutout to TGE, NSF, BLT, TSB, IMOK, and my old friends the 514 crew. People can follow my work at The_Curvazoid on IG or Curvazoid across all platforms.