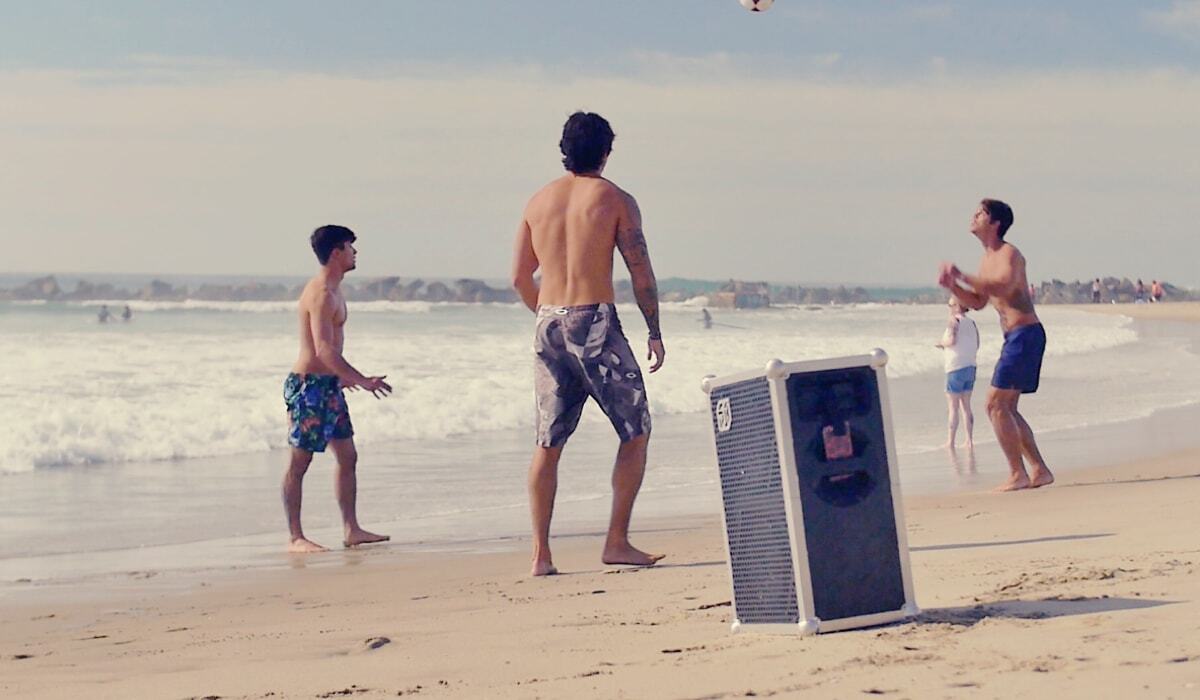 Back in 2019, Denmark’s Soundboks sent us a pair of crazy loud Bluetooth speakers to try out which, though certainly portable, each proved too much for one person in the long haul. Now a smaller and lighter – but almost as powerful – version has launched.

While not yet a household name in the same sense as Bose or Denon, the Danish portable audio company has made a bit of a splash among those who like to live it loud – having shipped out more than 150,000 speakers to folks in 40+ countries, and boasting an active online/offline community with 30,000 members.

The Soundboks story began with Jesper Theil Thomson building speakers as a summer hobby with two friends, before founding the startup in 2014 with Christoffer Nyvold and building fewer than a thousand first-gen speakers in a garage by the following year.

This Generation Zero build wore the kind of road-ready housing of a PA cabinet, could output 119 dB, accepted wired input only and had a 20-hour per-charge battery life.

The company refined the overall design, boosted battery life and made the battery unit swappable, offered a bass boost feature and added Bluetooth connectivity before launching on Kickstarter in 2016.

That successful campaign was followed by a direct-to-customer release for the second generation speaker in 2017, where volume and battery life were raised again, and a new black powder-coated finish introduced.

Whenever I hear the name Soundboks, I’m reminded of the time myself and a friend struggled up a steep hill hauling one of those third-generation “portable” speakers back to base after a sound test on the beach. Yes, it was very, very loud out in the open. And yes, it was very heavy too.

Built for music on the move

The Soundboks Go is roughly half the size of its big brother, give or take, and comes in a little over 6 kg (13.2 lb) lighter – which means this model can be carried in one hand to a field party, community basketball court, seafront fire pit or forest camp.

It’s still a fairly heavy beast though if you’ve got a ways to travel, and there’s an optional carry strap available for those who’d rather shoulder the burden.

Within its 459 x 316 x 266-mm (18 x 12 x 10-in) reinforced ABS/poly unibody are two 72-W Merus Audio Class D amplifiers that drive a 10-inch woofer and 1-inch dome tweeter for an effective frequency range of 40 Hz to 20 kHz. The electronics are IP65-protected to make the whole shebang splashproof, though the three bass ports in the cabinet mean that it can’t be submerged in the drink.

The Soundboks Go ships with the one battery only though, but if you already own a Gen 3 Soundboks, the battery from that can be used for either model. Otherwise, a second battery can be had for an extra US$149. Charging time is between three and four hours, more if the unit is powered on and playing music while charging.

The sound of Soundboks

We found the low end to be quite a force to be reckoned with on the Gen 3 speaker we reviewed in 2019, at which time a mobile app was in the works. That app is now available, and though basic Bluetooth 5.0 speaker functionality can be had without it – including the ability to wirelessly chain up to five Go or Gen 3 speakers together via cooked-in SKAA wireless technology – this mobile toolkit is recommended for getting the best from the Go experience.

Again, the Go proved a little bass-heavy for our tastes by default, but the sound profile out of the box was much more balanced than before with distinct improvements in clarity for the mids and highs.

If thunder is your thing though, there’s even more low end available through the app – while also bumping up the decibels to 121, at the cost of battery life and some clarity in the higher reaches. For reference, the max output of the flagship Gen 3 Soundboks is reported to be 126 dB so the Go is one powerful portable package.

There’s a preset sound profile for indoor use too (for 112 dB and up to 14 hours at max vol), as well as another Power mode (119 dB and 10 hours) and a very useful EQ mode for personal tweaking and saving of custom sound profiles for easy recall.

Users can also set a passcode for the Bluetooth connection and app controls to avoid hijacking at parties, and the system is future-proofed to some extent as upcoming performance and sound upgrades can be applied via the app.

An exclusive dance club on the Go

Soundboks users are also being invited to party via something called Direkt streaming, though it will initially only be available for iOS users. Essentially, wherever you and your Go are on a Friday or Saturday night you’ll be able to join a virtual club night of sorts.

Soundboks is busy teaming up with labels, clubs and artists around the globe and will stream weekend sets direct from club decks and studios in places like Copenhagen, Barcelona, London and Los Angeles through the Direkt platform. This streaming service will be exclusive to owners of flagship Gen 3 Soundboks speakers or the new Go model, and listeners who tune in can expect “an eclectic mix of genres, tempos, decades, origins and sounds.”

Though certainly a lot more portable than all other Soundboks before it, the Go still weighs in at 9.2 kg (20lb) so is a little heavy for a one-handed carry of more than a few hundred meters, but much easier to lug about when used with the optional shoulder strap. It’s very much designed for the outdoor life, with a reinforced unibody and rubber bumpers, and the build quality is excellent, though its looks won’t be for everyone.

Given our experiences with its bigger brother, the fairly well balanced default sound over Bluetooth or via the included 3.5-mm aux input came as something of a pleasant surprise. And the speaker has enough presence to provide the tunes at small(ish) outdoor gatherings or cut through the noise at indoor parties. Even better if a bunch are wirelessly chained together (there’s also a reinforced top hat mount on the underside for raising the Go high above the dance floor on a speaker stand).

Sound presets are available via the mobile companion app, and users can create and save custom EQ profiles to suit personal tastes. The UI is simple up front with more complex functions a screen or two away.

This go-anywhere boombox can’t quite match the awesome output prowess of its larger stablemate, but it packs a helluva volume punch and would prove a more than capable streaming companion for beach parties or camp cookouts. The Soundboks Go is available now for a suggested retail price of US$699.