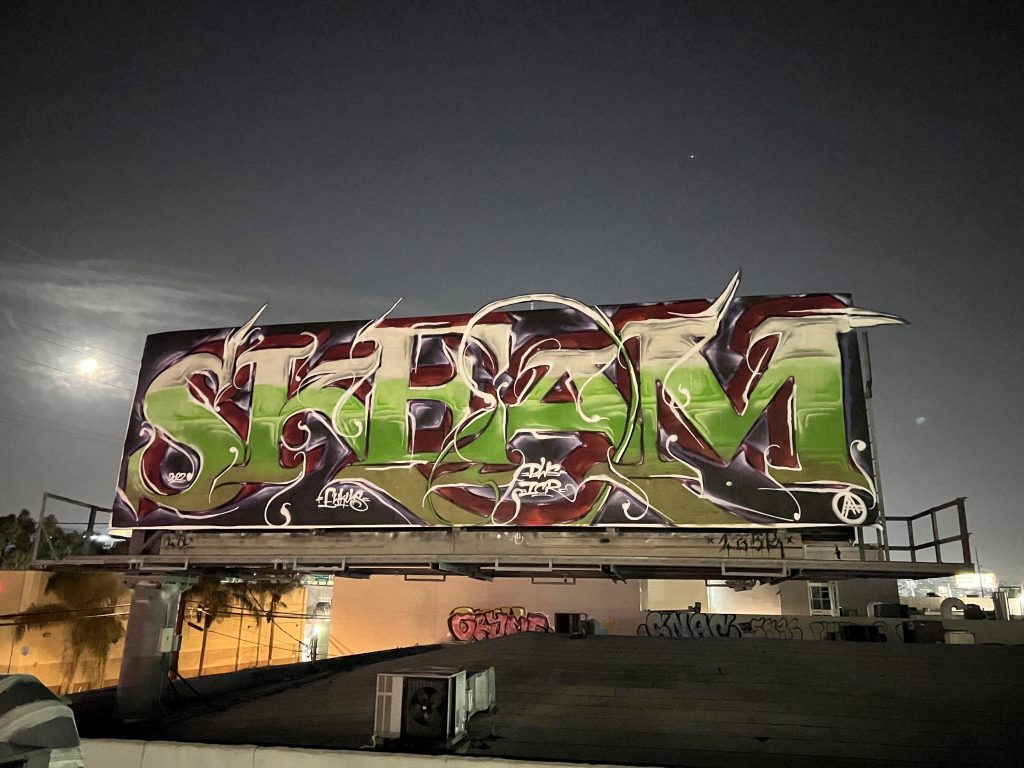 Alright so thanks for taking the time out to do this interview, can we get a brief rundown of who you are and how long you’ve been involved in the game?

What’s up man, thanks for having me.
I’m SKEAM, from BWS, ICR, NBC, crews. Been doing graffiti for a little over 20yrs.

Ok now that we have that out of the way we gotta talk about the piece you threw up on freeway 110. WHAT THE HELL MAN! It’s so rad, the full video on your Instagram shows you moving along the column while what I assume is a drone taking footage as a cop pulls someone over on the side of the road!  What were you thinking?? Did you think you had been seen? Please tell us how all this went down, it’s such a dope video.

Ya man, that spot was crazy not for being above the cars, but for not really having nowhere to run if the cops happen to pull up next to me. When I saw the cops stopping on the freeway next to me, I was tripping out at first but I knew I had to finish what I had started. Then saw it was for a car that was stuck on the side of the freeway. There was just so much going on, the on another side below me this building had people walking into it like every 10 min so I had to keep low because if someone would have called the cops, they could have been standing right behind me without me even knowing. Risky stuff but it was worth it. I Gotta give MAD CREDIT to Ewkuks for shooting and editing these SICK videos and making me look super sick!

Man you really push the limits of what you can do with this stuff, one of the other great ones is the piece you posted on March 25th with the huge billboard. It’s crazy dope, do you ever get close to getting caught with pieces like this? What is it like to drive past that on a normal day? It must be hella satisfying.

I’ve been fortunate to stay low-key, but it’s sketchy for sure when cops are passing by and can easily spot me if they’re looking at the right times. Seeing my stuff in person is insane, knowing how much work I put into accomplishing them and the prep work is really dope. These big billies are taking about 2 nights to complete because of the scale & the additional add-ones.

Speaking of epic the Batman one you did was so sick! I seriously don’t know how you get away with this, and really it’s so good some marketing companies should offer you paid work for something like that. Do you do something artistic creative as your day job?

Thanks man, ya, not sure if I would take a job from them. Wouldn’t like someone telling me what & how to do my stuff and it would take the thrill away from it all. I’ve been a Metal Framing Carpenter for about 13yrs. Guess the combination of work and my graffiti was bound to happen eventually.

Also how has selling prints been for stuff like this? I see you do quick productions of limited edition prints which is cool cause the piece itself is “limited edition” in its own way right?

The prints have been good and ya it makes them kinda special since their limited runs, cool to see people wanting to buy our prints.  I’m currently working on getting my Website started and ill have Merch, pins, patches, Custom painting Skeam gloves & other cool stuff on there for people to Purchase

Style Wars, Infamy, Piece by Piece, Atlas Documentary. Seeing these and other films motivated me seeing them paint and talk about graffiti and its history was intriguing. Made me just want to get out there and paint!

I also saw you were recently in El Paso, TX for Borderland jam, how was that? Do you do a lot of group jams like that? Shout out from Texas by the way!

It was definitely an experience for sure, we drove up in my truck and camped out in my tent on top of my truck, cooked out on the grill, and painted. It was definitely one to remember. Ya I try to make it out to the events from Time to time if i have the time. I got a few I’m going to this year should be fun.

Is there any artist that you grew up admiring that as you got older faded into obscurity that you think deserves more recognition? Who were the artists that you looked up to when you were coming up?

Growing up with a Christian mom, going to church I didn’t get out much. But some guy in the church who went by RAHK is how I started to get into graffiti. I was like 12-13 years old hitting the tracks with him not really knowing anyone or anything about graffiti, until my freshman year I went to public school and heard of SABER, and saw his HUGH roller in the River, since that moment I knew I wanted to accomplish something HUGH like that. Seeing ATLAS documentary, REVOK & AUGOR hit billies, ZES with his crazy spots, and other crews doing really big pieces motivated me so much to work on my style and try to do something no one has done before or to UP the scale of what’s been done before. And as life has its ways of working, Family kicked in, job, career, other hobbies and slowed me down. But this year something in me snapped and hit me with a boatload of ideas. Never in the 20+ years of doing graffiti have I had these ideas or thoughts come to mind. Like even telling myself, ( your crazy how you gonna pull that off) and there I go, planning and working it out. Guess it’s true when people say, (Times have changed).

How many times have you been caught or gotten close to getting caught? Any crazy chase stories?

I’ve been arrested quite some times all before I was 18, I painted drunk or hitting dumass spots that were burnt out and I didn’t know. This one time our crew was battling another crew around our city. And while I was on the rooftop hanging over catching tags I looked up and saw a cop across the street with his lights off, I was like FUCK time to dip. Ran to the back of the building and saw some guy in his pajamas, guess he was living inside the building I was painting on. He says “come down the cops are coming”, I was like “ FUCK YOU”. Once I got down the cops were pulling up and once he went around the trash can, I was GONZO! Ran down the street into the backyard of someone’s house and hoped the fence I landed inside a yard with a covered porch (all dark), so I said coo ima hide out here. BUT nope DOG started barking and chasing me. I hopped on the wall and on the roof and sat there hearing the ghetto bird on its way and a grip of cops patrolling the block I for sure thought I was done with. A crazy idea came to mind, i had long curly hair back in high school. So I took off my beanie I was wearing let my hair down, had 2 shirts on, took my shirt off, and left my undershirt on which was a different color, and jumped down starting to walk out of the driveway thinking I hope they don’t recognize me. And shit you not, walked right across the street in front of a cop car to my friends hows almost shitting my pants hoping he didn’t recognize me hahahaha. Best moment of my life.

Wanna give a shout-out to my wife first of all cuz she has to deal with my absence and the long hours I put into my hobbies. Ewkuks for supporting me and helping me accomplish & capture these insane missions. My brotha WOER BWS, My crews BWS- Building Wild Structures , ICR- I’m Crowned Royalty, NBC- Never Being Comfortable. Also, Double A Spraypaint for supporting me and having my back. My Homegirl Wendy Random for flicking me on all those fun missions. You can follow me on Instagram @skeamone & my Team @ewkuks , @double_a_spraypaint