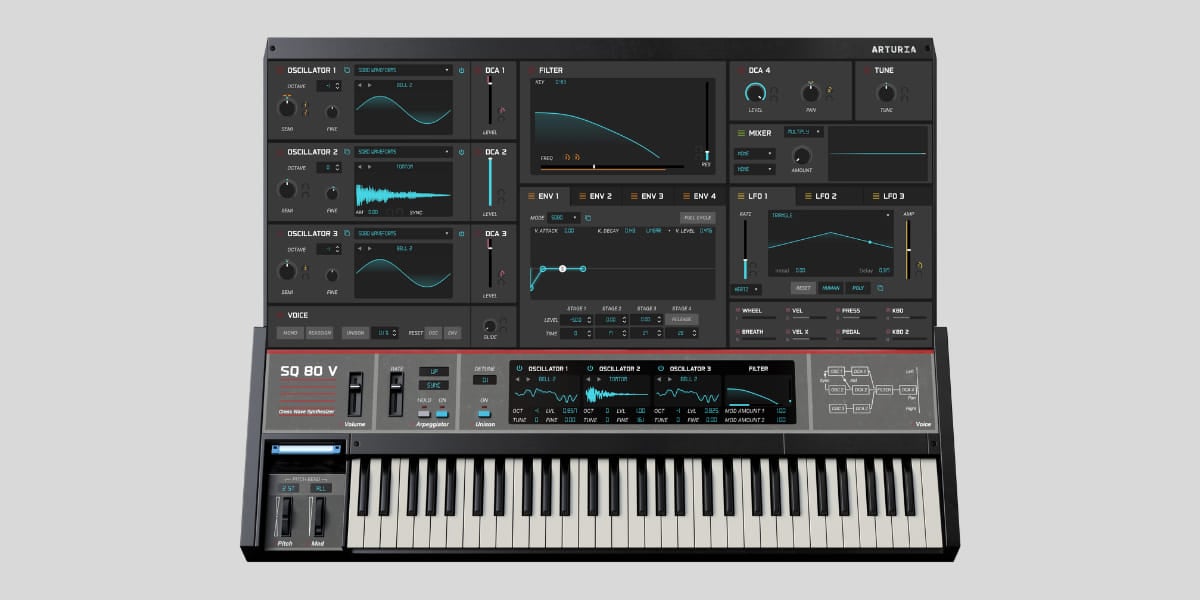 I’m starting with SQ80 V because Ensoniq’s classic 80s hybrid synthesizer has been on my wishlist since… forever.

I never actually pulled the trigger on the original Ensoniq SQ-80 (mainly because of its size), but I tested Arturia’s SQ80 V when it was released in September 2021. Safe to say, Arturia’s virtual recreation of the SQ-80 proved good enough to postpone my hardware purchase indefinitely.

The SQ-80 is a hybrid analog synthesizer with digital waveforms and analog Curtis filters. Its charm lies in the somewhat lo-fi sound quality that is heavily colored by the 8-bit DOC chip and the analog filters.

It’s a combination of gentle bit reduction and analog saturation that sounds beautifully warm and mellow. The sound of the SQ-80 is the essence of synthwave and 80s soundtracks, if you ask me.

Simply sampling SQ-80’s digital waveforms and using them as the sound source for a virtual instrument wouldn’t be enough to capture the hardware instrument’s sonic charm.

Thankfully, Arturia went above and beyond expectations, arming the SQ80 V plugin with state-of-the-art emulations of the 5503 DOC chip and CEM 3379 analog filter. The result is a virtual edition of the Ensoniq SQ-80 that truly rivals its hardware counterpart.

Even better, the software edition opens up sound design possibilities that aren’t available in the original hardware. Arturia’s expanded digital waveform collection allows you to create thousands of waveform combinations that were never possible with the Ensoniq SQ-80.

Furthermore, the original instrument was notoriously hard to program. Its streamlined controls meant that the users had to do a lot of button-pushing and menu diving to customize the sounds.

The good news is that SQ80 V comes with a modern GUI that brings all the modulation controls and other parameters to the front panel. The SQ80 V is a joy to program, and it’s miles ahead of Ensoniq’s hardware in the user experience department.

If you’re into 80s movie soundtracks, synthwave, or any other music style that relies on 80s nostalgia, the SQ80 V is an absolute must-have. On the other hand, look elsewhere if you’re in the market for pristine analog-style sounds. Arturia’s virtual SQ-80 sounds just as lo-fi as the original. 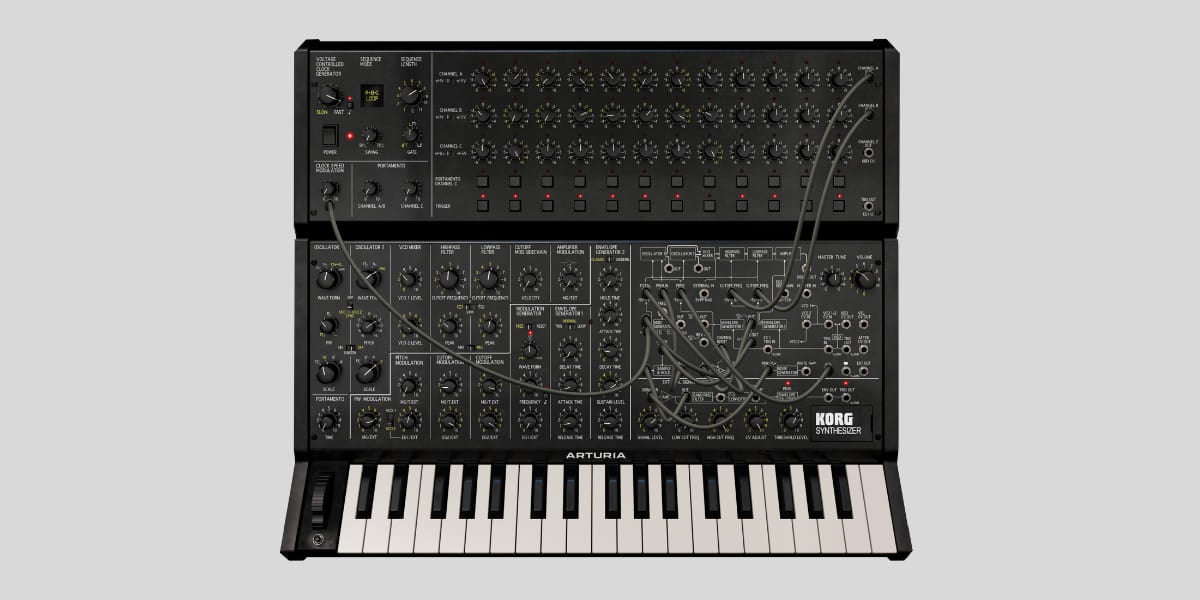 With its screaming resonant filter and gritty waveforms, the hardware Korg MS-20 is an absolute classic. It has a distinctively edgy sound character perfect for aggressive sounds like growling basses and fat analog leads.

Unlike the Ensoniq SQ80, the Korg MS-20 is much easier to come by in hardware form. Less than a decade ago, Korg even released an updated miniature version of the original hardware, so analog-loving music producers could easily add some MS-20 firepower to their sound design arsenal.

But if you don’t want to invest in a hardware synthesizer setup or simply don’t have the space in your flat (I feel your pain, comrade), then a virtual recreation of the MS-20 is the next best thing.

Arturia’s new Korg MS-20 V was built in partnership with none other than Korg themselves. It’s no surprise that the virtual instrument sounds very similar to the hardware, with equally aggressive filters and that unmistakable MS-20 character.

But that’s not all. Arturia expands the capabilities of the original by adding six-voice polyphony to the mix. This makes the MS-20 V much more than just a monophonic bass and lead generator.

However, unlike the SQ80 V, I can’t say that the MS-20 V is easier to program than the hardware. It’s hard to find a reason not to prefer the MS-20’s knobs and patchbay over any virtual GUI.

That said, Arturia’s work on the MS-20 V user interface is as good as it gets. The virtual patchbay is well designed, and the control layout is just as intuitive as the original. However, the “convertible” modulation panel is the GUI feature that steals the show.

You can expand the MS-20 V’s user interface to show all the routing and modulation capabilities in one multi-page panel. From there, you can access the sequencer, the built-in effects, and more.

The full version of Augmented Strings takes the concept much further. It retains the front panel and the sound sources found in the freebie while expanding on its capabilities with the Advanced control tab.

The Advanced panel is where you’ll find all the sound design control parameters needed to create entirely new and unique hybrid synth sounds. This is where users can mix and match different source samples and synthesis algorithms, fine-tune the modulation, apply effects, and freely customize the existing presets.

Augmented Strings is the perfect string instrument for cinematic sound design. It delivers a range of cinematic strings while allowing the user to develop exciting new combinations through patching and experimentation. 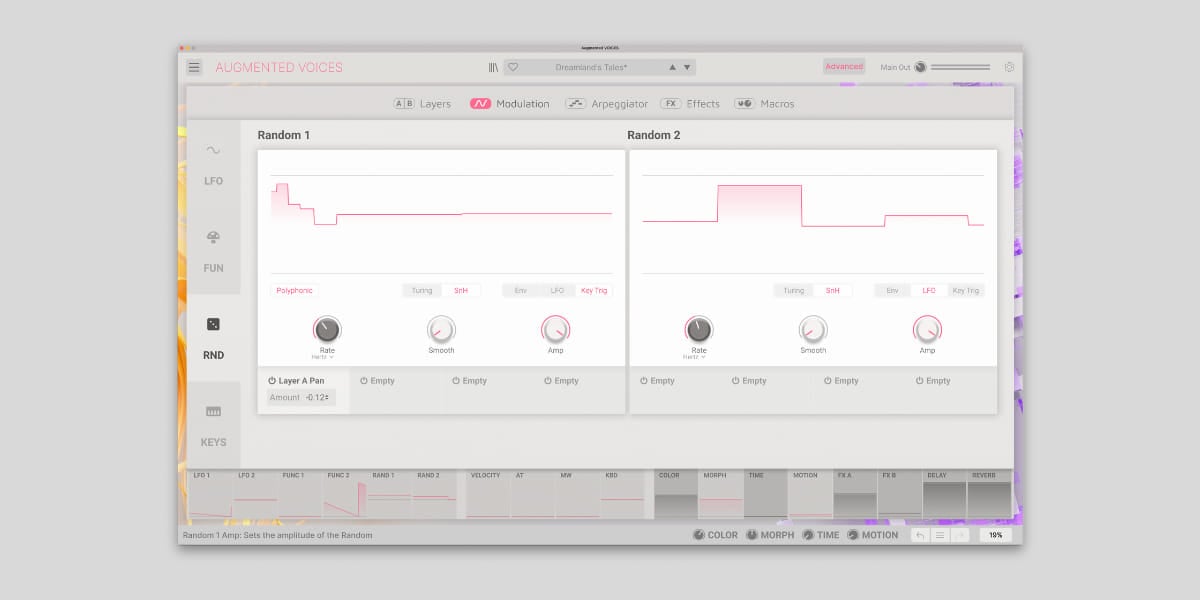 Similar to Augmented Strings, the new Augmented Voices plugin is a virtual playground for cinematic sound design. The difference is that it focuses on human voices instead of strings.

The instrument utilizes the same hybrid synthesis engine as the one found in Augmented Strings. Users can combine four sound layers to create complex voice sounds. Two sound layers are sample-based, and the other two rely on real-time synthesis.

The human voice is arguably the most expressive instrument in the world. But what happens when you combine it with various synthesis engines?

Augmented Voices is the answer to that question. It is an impressive sound design tool from Arturia that will surely find its place in many cinematic soundtracks.

Arturia V Collection 9 is better than ever, with four new virtual instruments and a collection of virtual analog hardware to die for.