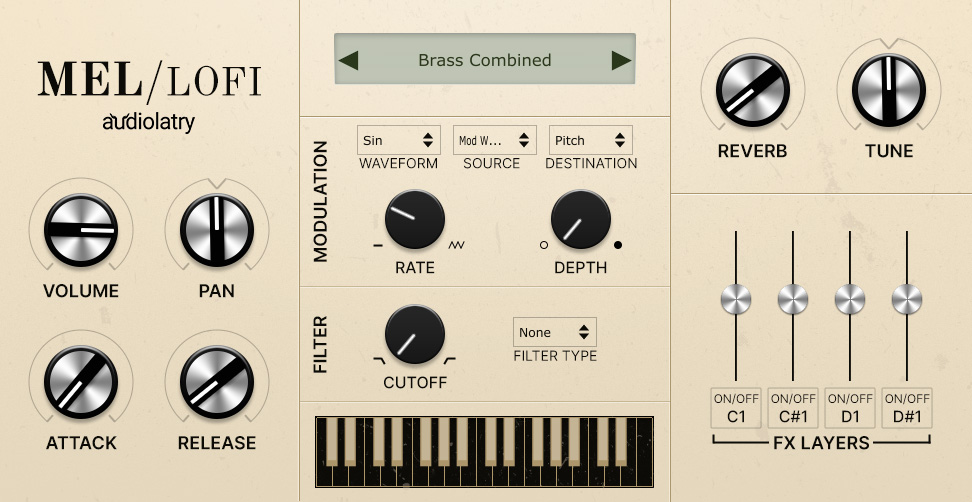 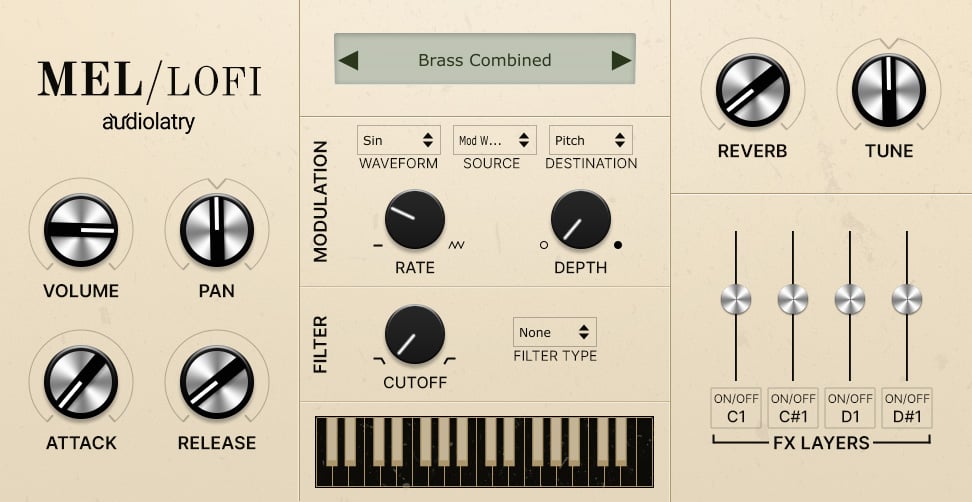 Mel-Lofi is a virtual instrument (ROMpler) that gives us the sound of the Mellotron (samples recorded by Tajiguy).

The Mellotron is a weird and wonderful instrument famous for its unique sound and design. It was developed in the early 1960s, and its sound came from pulling a short length of tape across the playback head as the keys are pressed.

A few hardware variations are available now, including digital recreations, and they are all relatively expensive. It’s still a sought-after sound; I still go to my old King Korg for its Tron sound.

Mel-Lofi gives us a taste of that sound for free with 23 instrument presets. The featured presets include Strings, Brass, Vibes, Flutes, and more.

It sounds gritty, old, and a bit like an instrument that has seen better days, which is what you want from a lofi plugin.

The FX layers can be toggled on/off by key switches, making it easier to develop the tone/sound as you play.

We’ve covered a few instruments from Audiolatry, like PlastikGuitar and Drum8. It’s probably the keyboard player in me, but Mel-Lofi is my favorite so far.

While I think Audiolatry has done a great job of capturing the character of the Mellotron with an exaggerated lofi feel, we shouldn’t get too caught up in comparing it to the original hardware. It’s a very useable sound that will be great in the right context.

Audiolatry lists some suitable genres, including Lofi Hip-Hop, Chillout, and EDM. It’s great for so many things; I love the Tron Strings sound on Sci-Fi and dystopian future scores; on their own or under some pristine strings to add some grit. The kind of things that the late, great Vangelis would have done with Tron sounds.

Mel-Lofi is available in AU, VST, and VST3 formats for macOS(El Capitan to Monterey) and Windows (8.1 to 11).