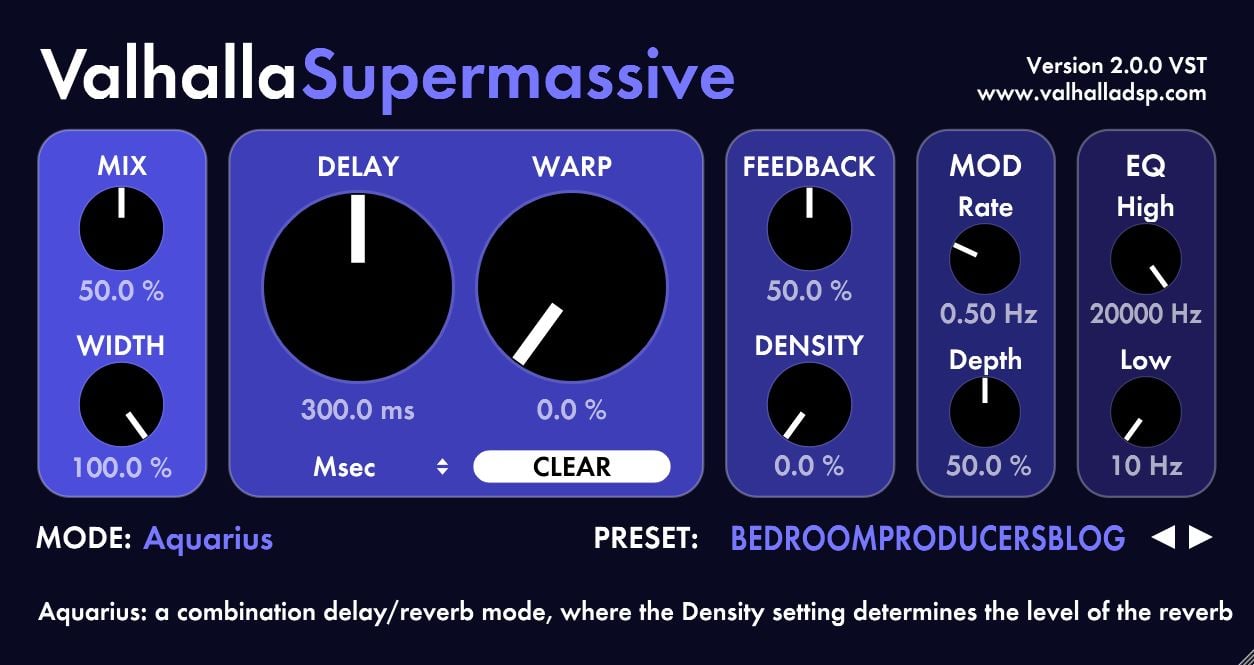 Around two years ago, Valhalla released Super Massive, a free plugin that offers, as the developer puts it, “echoes that are too weird for ValhallaDelay, reverbs that are too massive for a general-purpose plugin, strange sounds that defy categorization.”

Anyone who takes a few minutes to delve into this plugin will understand precisely what Valhalla DSP means by this description. Super Massive is full of considerable delays, massive reverbs, and a handful of other dramatic effects.

Aquarius has eight delays in the entire feedback delay network but only two linked delays in the output signal, one coming from the right channel and another from the left. The result is a very classic-sounding delay.

Users can select their delay time in milliseconds or note selection such as ¼ note, ⅛ note, etc.

While Aquarius mode is relatively tame in general, as you turn up the density control, the other eight delays in the network come out to play, giving you a much wilder, reverberated sound.

I found that Aquarius mode is a useful all-around-reverb delay combination- almost like its own stand-alone tool within the Super Massive plugin.

It could be useful to add some gentle delay to guitar tracks and, if dialed up, could add some lushness to vocals.

Pisces mode is similar, but it’s already dialed in to be a more extreme reverb.

This mode also has multiple delays in the output signal. Turning the density up activates all of them simultaneously and creates an epic reverb/delay combination.

Unlike Aquarius mode, Pisces is much more suited for those seeking an extreme and vibrant reverb/delay.

The overall theme of Valhalla Super Massive is, as the name suggests, to make things sound massive!

While the new Aquarius mode does offer some more mild settings, both of these modes could still fall under the category of more extreme effects.

Valhalla Super Massive is compatible with DAWs that support VST2.4, VST3, AU, and AAX formats. It’s important to note that the latest version only works in 64-bit plugin hosts.

How to Play Drone Guitar

A Complete Guide To The Behringer Crave Synthesizer